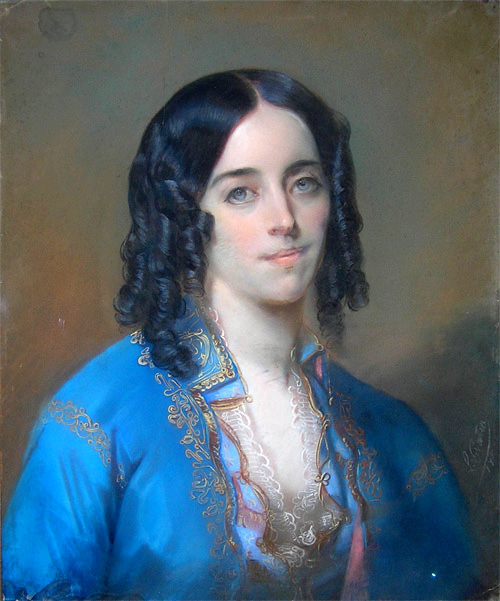 Preludes and Nocturnes : a historical romance story by Moricz, aged ? at the time of publication. Archived from [Redacted], March 22nd, 2009.

[A/N: Returning back to a more abstracted form for this one. Hope you enjoy! :D]

She remembered when she first saw him from across Marie and Franz's parlor. At first she couldn't be sure whether this was a man or a sickly child - how diminuitive his form was! How transfixed she was by his wide, almond-colored eyes, the slight hook in his nose, the tousled brown curles that framed his soft, yet stern features!

In her grief and how it had now separated her from all of their turns for the worst together, George recalled just how much she had genuinely loved Chopin, even on that very first encounter.

George recalled how she had to calculate the way in which she made her approach. She took up a conversation with Delacroix and Liszt, about what she could not remember, for it was a mere distraction, a ploy to make her seem popular and coquettish. The first half of that party was such a blur - it seemed like she had arrived and for hours she had smoked nervously, chewing on the end of her cigars, talking to anyone who would listen. Why was she so nervous! She was an expert paramour, a femme fatale, a great romantic! Alas, there was something about Chopin, his fragileness, his quiescence, his shyness despite the fact that he clearly knew how to socialize at parties but only to the extent one does in order to meet the barest minimum of society politeness.

"Alright!" Franz called, clapping his hands. The conversation simmered down to an excited quietude. "How about some music, shall we?" The room applauded.

"I shall go first, as it is my party," announced Franz as he took a seat at the piano. "Followed by our esteemed guest, Monsieur Chopin. Afterwards, myself and Monsieur Chopin will play a Bach duet as an encore." Franz did not allow time for discussion, for the second the last words had left his lips, he had turned to the piano and buried himself in it.

George loved watching Liszt play, the pure drama and passion of it. She could well understand why Marie gave up her seat at the aristocracy in order to live with that music every day of her life. If she hadn't had such respect for the Comtesse, she would have been interested in Franz herself. George could not help but let her eyes wander to where Chopin was sitting - observing his reaction at the music's every turn. Chopin appeared nonplussed at first, but when Franz descended into a flurry of scales and arpeggios, the Polish man couldn't help but widen his eyes at the sheer deftness of Franz's technique. As if to not intimidate Chopin too much, Liszt ended his set with a delightfully simple Mozart Sonata. After the final notes died out, the room burst into applause. Liszt rose from the piano and took a deep and enthusiastic bow.

"Monsieur Chopin is much less of a gaudy showoff than myself, and I brought him here tonight because I believe his original compositions are outstanding, poetic, and certainly worth hearing. Please welcome our newest friend, Frederic Chopin." The crowd, buzzing with excitement clapped thunderously.

"Thank you Monsieur Liszt. To show my gratitude for your kind invitation, I hope you will not mind if I perform one of your own compositions?" Chopin inquired with a bit of mischief. George found his voice to be gentle and sonorous.

"Not at all! It is I who am deeply honored," Franz answered enthusiastically. Chopin mustered a thin smile and then took his seat at the piano and sprang into the presto opening of Liszt's C-minor etude. George was instantly transfixed - she could not believe that such big music came from the small, sickly form sitting at the piano. She watched as his slender hands ran up and down the piano, striking chords she would have thought impossible for anyone other than Liszt himself. When he was finished, which seemed far too soon, the crowd couldn't help but applaud and that included Liszt, who took great pleasure in having his works executed deftly by someone other than himself. Chopin faced the crowd and gave a flustered smile. "And now," he said, "a sampling of my own works."

George could break her gaze from the piano. Even when ash from her cigar began to sift onto her lap, she brushed it off and put out the cigar without looking away. The writer had never before heard such music, music that so deftly combined sensuousness with sensitivity, delicate musical phrases with intense virtuosity; Liszt was correct when he said that Chopin was a poet of the piano, for only poetry could capture such a broad range of emotions in such a condensed and artful form. She wished direly that the music would never stop, but alas, it did, and she could not help but stand up to applaud. Chopin turned to see her standing there and immediately went red in the face, for nobody else was standing, though the applause was appreciative. Franz returned to the front of the parlor.

"See, isn't he just brilliant? An absolute genius of the instrument, in my view, and that's not just because he played my music!"

"Thank you, Franz, you are too kind," Chopin replied shyly. "Shall we?" he gestured towards the piano. The two took their place - Liszt at the treble and Chopin at the bass end of the piano. Their playing together brought great amusement to everyone at the party, especially George. The two could not be more different from one another - in their stature, their style of performance, and their demeanor - and yet, they made an excellent pair at the piano, and seemed to have, in a relatively short time, built up quite the rapport. After they finished the Bach piece, they smiled at each other, and bowed before the party guests who had all raised their glasses of champagne in appreciation.

"Thank you, thank you kind friends! Now, I hope the rest of you do enjoy the party. There's still much of it left to unfold!" Liszt grinned, before once again joining Marie who was sitting on the divan.

George knew that now was not the time to approach Chopin, who would surely be surrounded by new admirers. She decided to play the waiting game, watching carefully for a lull in the conversation and the varying signals of a party on the decline - absentee champagne flutes, empty plates, farewell greetings. It was at this point that she decided to approach Chopin, who, appearing exhausted, had collapsed in an armchair.

"Monsieur Chopin," George addressed him. "I wish to congratulate you on a most splendid performance. Franz had informed me of the poetical and rich emotional character of your work, but I simply thought he was exaggerating, as he is wont to do. Alas, I see that I was mistaken and your pieces are as beautiful as Franz described them." Chopin peered at her through those large, dark eyes. "Thank you greatly for your kind words, madame..."

"Sand," Sand completed, reaching into a coat pocket for another cigar, which she placed between her lips and lit, much to Chopin's chagrin. "George Sand."

Chopin coughed. "Ah, Madame Sand, I have heard...fascinating...things about you." Chopin did not look amused, but George most certainly did.

"Oh? What sort of fascinating things?" she teased. Chopin flushed, realizing he had been caught engaging with gossip.

"I've heard that you are a writer," he replied, trying to save himself. "And that you wear men's trousers and smoke cigars."

George smiled coquettishly. "I suppose I am guilty of all accusations." George offered Chopin a cigar. Coughing profusely, he shook his head.

"Monsieur Liszt told me that you are from Poland - how are you finding Paris so far?"

"I must admit it is quite a strange departure from what I am used to. Everyone here is far more...relaxed."

"We are, I must say, a rather salacious bunch," George interjected with a chuckle. "I promise that letting go of one's reservations is an acquired taste, though I'm sure you'll find that it is acquired more rapidly than one might expect." She peered intensely at Chopin through her long eyelashes, and the young pianist quickly averted his gaze. Not knowing how to respond, he rose from his chair.

"I do apologize Madame Sand, but I must end our conversation most abruptly. It's nothing personal, merely that I only have a certain amount of stamina for such excitement as that provided by parties and I'm feeling rather, well, faint." Chopin did appear both faint and flushed, which George, though longing for a longer game to play, took as a signal that her job here was done.

"I do hope that you call on me, Monsieur Chopin. My address is easy to remember. My room is one floor beneath this one."

"I'm charmed, Madame, and grateful to have made the acquaintance of someone as notable as yourself, but as I said, I really must be going..." Chopin was cut off by a rather intense cough.

"Of course, of course," George replied, putting a hand on the wheezing man's shoulder as if to steady him. "A pleasure to meet you as well, and to have the privilege of hearing such wonderful music."

Their eyes met for quite a long time, George's gaze intense and probing, and Chopin's one of resistance. After Chopin finally broke their stare, he offered a curt little bow and turned away. George watched him as he greeted Liszt one more time, shook his hand, and then quickly made his way toward the door, as if trying to avoid being approached by anyone else. What a curious man, Sand thought to herself. She found herself unexpectedly eager to learn more.
------
[A/N: They finally meet! Ah George, what a little flirt! The next chapter will focus on just how George tracked Chopin down, quite a funny little episode indeed. xD]